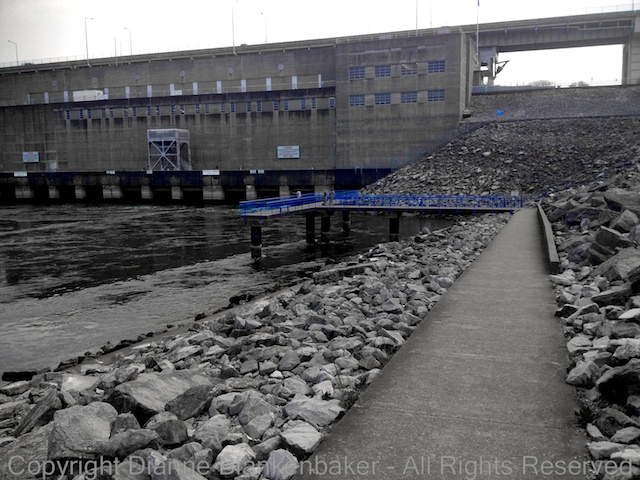 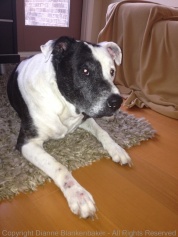 Will my dog be lit better with a new flash and sharper with a faster camera? 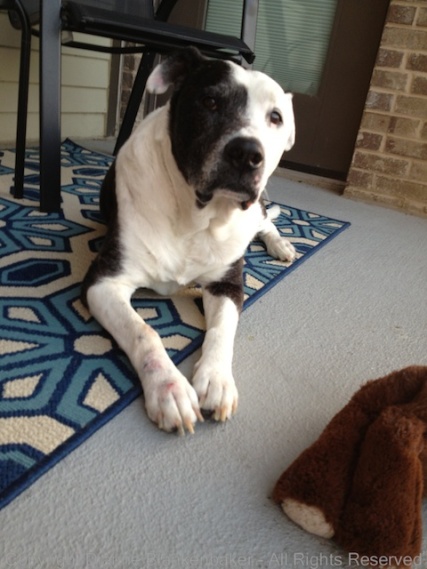 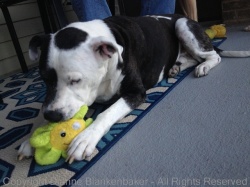 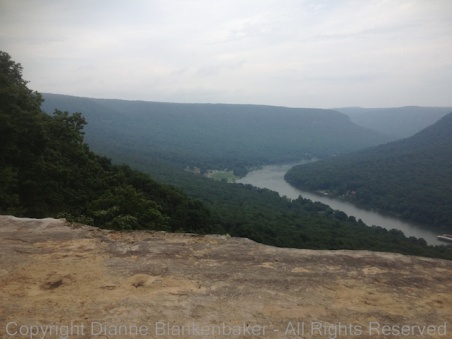 The inspiration for these lessons, my best friend Gina, reports that her photos are getting worse instead of better.  This is a common experience–there are many reasons for this phenomena:

Your Assignment:  Take a look at the photos you created as part of each lesson.  Take stock of what you learned from each exercise.  Do you have better control of where you focus?  Are you framing your subjects in new ways?  Are you better able to control the exposure you get?  Congratulate yourself for what you’ve learned, no matter what the photos look like.

Why is this awesome?  There are many times when the thing you want to be in focus is  darker or lighter than the overall scene and you have to choose between what you want in focus and how you want the image exposed (see lesson 5).  With Camera Awesome, you can focus in one spot and adjust the exposure in another spot so you get a better exposure and still get the focusing point you want.

For example, when shooting landscape scenes like the one in the example below (click to enlarge), with the default camera app, if I choose the rock for the focus point, the sky turns white.  If I choose the sky to get a better exposure, the rock is not longer sharp.  I don’t want a blurry foreground and I don’t want a white sky.

Using the Camera Awesome app, I can touch the screen with one finger and, while keeping that finger still, tap the screen with a second finger to get a green square for focusing and a blue circle for setting exposure. I can move each around with a fingertip to find the best focus point and best exposure point separately.

By separating the two functions, I have more choices about how the photo will look. 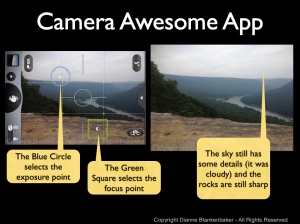 One note I didn’t mention in yesterday’s lesson:  With the Camera Awesome app, the photo is stored inside the app until you tell it to save it to your Camera Roll.  It’s best to choose the images you want to keep and save them to your Camera Roll for future use as soon as you’re done shooting.  That way you won’t end up with hundreds of photos in the app.

Here’s one last example of when separating focus and exposure are important.  I focused on my dog is in the foreground, but found an exposure that keeps details visible in both the dark spot on his face and the sky. 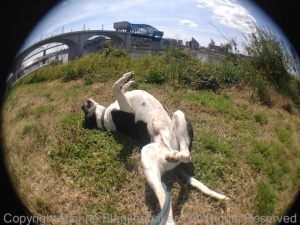 Your Assignment:  Choose a scene that has some brighter and darker areas where you want to focus on something in the foreground.  Using the default camera app that comes with the iPhone, choose the focus point and take a picture.

Next, open up the Camera Awesome app and practice touching with one finger and tapping with a second finger to get the separated exposure and focus settings to appear.

Focus on the same point you focused on using the default app.  Now slide the exposure around until you get the best exposure for your image.  Take a picture.  Save it to your Camera Roll.  Compare the two images.  Which one do you like better?

One of the things we don’t always think about when we are taking photos is how we’re holding the phone.  Using an iPhone or any small-bodied camera, especially smart phones, creates a challenge around holding the phone straight and still.  This can both create blur and distortion as well as change the framing.  Click image to enlarge:

The “rule of phone” here is to hold the phone as much like a camera as physically possible.  That means holding all 4 corners of the phone firmly.  Use your thumbs on the bottom side.  On the top side, use your left index finger and your right middle finger.  Assuming you have an iPhone 4S or later, keep your right index finger free to press the volume up button to take the photo.  Your finger placement will look like this (click to enlarge): 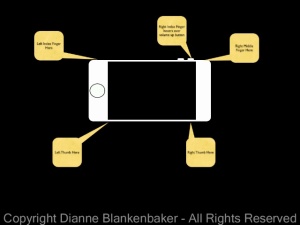 If you turn your phone vertically, you may find it easier to keep your fingers in these positions, but open your unused fingers on your right hand to keep them out of the frame.

Now that you have a good grasp on your phone, look at the screen of your iPhone to frame the subject, use your free index finger to tap the screen to set focus/exposure, and then take a moment to make sure you’re stable and you haven’t messed up your framing in the process.  Then, click the volume-up button to take the photo.

Bonus tip:  if you have a place to set your phone that gives you the framing you want, you can use the volume up button on a headset to take the image, too.  This will ensure your phone is perfectly still and perfectly perpendicular.

Another thing to be aware of is the angle you are holding your phone at.  I sometimes find that I am not quite able to fit my subject in the frame.  When I look at how I am holding my iPhone, I discover I am holding it at an angle to the subject, which makes the space I have to work with vertically more condensed.  Compare these two images (click to enlarge): 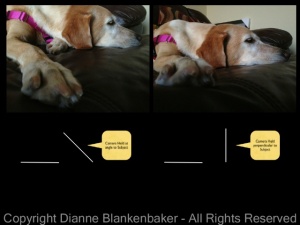 I held the phone at the same spot but at two different angles.  Holding the phone straight gave me more vertical space in the frame.  Keeping the phone straight can also help when you are taking photos of objects that are square and you want them to look straight.  As is true with any “rule,” sometimes an angled phone works great.

Your Assignment:  Practice holding your phone like a camera.  Start with the instructions above and try sliding your thumbs closer together or further apart.  Try using different fingers.  Practice setting focus/exposure and clicking the button to see if you can find a comfortable grip that helps you keep the phone steady while you move your free finger around.  You might even try turning the iPhone around so the volume-up button is under your left thumb–especially if you’re left-handed–some people find this easier.

Now take a few images with the phone at a right-angle to the ground.  Without moving, try tilting it forward and taking a photo and then back.  See how it changes what fits in the frame.  Notice if it affects the way the subject looks. 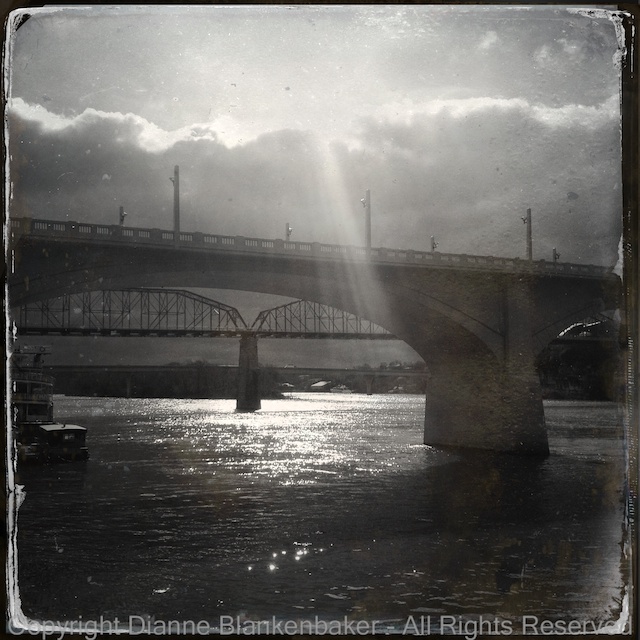 In yesterday’s post we explore the rule of thirds.  Today, we’ll add the second “rule” (remember, rules are only meant to help you understand the choices you can make) of taking better photographs:  fill the frame.

You want your frame to be full of your subject.  Not the stuff around, behind, above, below the subject, just the subject.

Let’s look at what’s in the frame.  When you look at this image, you see that I have an ugly blanket draped sloppily over my sofa, there’s a plastic tray on one arm, an outlet partially showing behind the plastic tray, and an awkward corner of an area rug in the lower foreground along with a wood floor.  All of these things distract from my subject, which is my dog.

Even though I applied the rule of thirds by placing the upper-left intersection of the grid (discussed in yesterday’s post) on my dog’s eye, my dog looks like he’s floating in the middle of a bunch of other stuff.

When I apply the rule of filling the frame with the subject, this is what I get:

There are several things about this image that could be improved, but we’ll save those for later lessons.  In spite of these issues, the sloppy blanket has become a neutral background and there is no question about what the subject of this image is.

As a side note, I do not recommend zooming using the iPhone or any other camera that doesn’t have Optical Zoom.  Optical zoom means there is a moving lens that makes the image look closer.  A camera like an iPhone camera has Digital Zoom.  Digital zoom means the magical wizard in your smart phone figures out how to make the image look bigger, but it reduces the resolution of your image, often resulting in something really grainy.  If at all possible, use your feet instead of your fingers when it comes to getting a close up with a smart phone.

Your Assignment:  Pick your favorite subject that’s willing to stay still for a few minutes.  Stand far back and take an image of your subject applying the rule of thirds–don’t worry about what else is in the frame.  Now, step up close, apply the rule of thirds again, fill the frame with your subject, and take a second image.  Remember you have the option to turn your iPhone vertically if that helps.  Which image captures your subject more powerfully?