This one was a touch choice–a little dark but good detail in the sky was what I went with.

This is another example where the camera’s meter probably metered this correctly–the similarity in luminance from the background and the subject’ makes that more likely.

This one the meter could get close on. 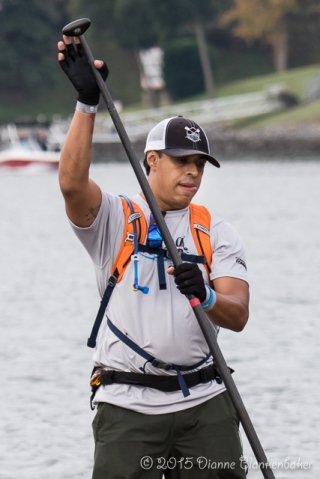 The camera’s meter will think this image is over-exposed because of the bright background.

This guy was taken just after dawn, making getting both the bird and the sky possible. Mid-day shots result in a completely white sky.

The camera’s meter would probably be correct for this image because of the darker background.

The meter might have gotten close to good exposure on this one, but it would probably still have been off.

With the subject so very small, the water darker and the faces not visible, the meter reading would probably have yielded about the same exposure.

Number one question from beginning photographers who just shot an outdoor event on a bright sunny day on an automatic setting: why are my photos so dark?

Having just shot a big paddle boarding event here in Chattanooga (Chattajack 31), this question came up quite a bit with paddle boarders against the bright water and/or bright sky.

Let’s compare. If I had my camera on any automatic or semi-automatic (like Aperture Priority (AV) or Shutter Priority (TV)) without doing anything else (like using exposure compensation and spot metering), this is what this photo would have looked like:

Because I used manual exposure controls and set the exposure to correctly expose the person, this photo looks like this:

If you are a novice photographer who really doesn’t want to understand why this is, all I can say is that you might want to look into one of the point-and-shoot cameras that claims to be smart enough to compensate for bright backgrounds—cameras are getting smarter and smarter.

If you are a photographer who really does want to understand why this is (and you don’t already), let’s talk about how metering with the camera’s built-in exposure meter works. I will not attempt to explain all aspects of metering in this post—there is always more to learn.

I am amazed by the number of folks who show up in some of my not-quite-beginner classes who do not know that their camera has a meter and do not know how to read it. So, let’s start with that.

Your camera measures the amount of light reaching the sensor and the meter tells you if the exposure settings you have (shutter, aperture, ISO) will yield what the camera thinks is a good exposure. A “good” exposure to a camera means that the amount of “brightness” or luminance of the image will average out to be the same as the luminance of 18% gray (or 12% gray as some argue). Whether it’s 18% gray or 12% gray, it’s a fairly dull gray color.

This is supposed to be a good average of the range of luminance in various subjects and will result in great exposure when your subject has the same luminance as 18% (or 12%) gray.

However, when your camera meters a very bright subject, it thinks it’s over-exposed because it is brighter than the gray it’s measuring against. So, in automatic settings, it under-exposes the images to make them average out to the same luminance as the gray standard.

I have had my students do a fun exercise that I learned when I was starting out. You put your camera on fully automatic with no flash, put a white piece of paper in even light and take a shot such that only white paper is in the frame. Then you do the same with black paper. Finally, take a picture where half is black and half is white. The first two pictures come out nearly identical—18 (or 12)% gray! The half and half comes out with correct exposure. If you’re thinking “oh, yeah, of course it would do that!” then you get how the built-in meter works and why the automatic settings the camera picks will make this happen.

If you don’t get it yet (and it’s OK if you don’t–it takes people some time to get their heads around this), you might want to try this: http://photography.tutsplus.com/articles/quick-tip-exposure-a-black-and-white-solution–photo-9480

You can also do this exercise on manual. Just make sure that your meter reads “0” with your exposure settings (change your shutter speed, aperture size, and/or ISO values until your meter reads 0). You will get the same results.

The camera thinks perfect exposure = 0 on your meter. So when you’re exposure settings allow the area the meter is metering to average out to the same amount of light 18 (or 12)% gray would meter at, the meter reads 0.

The trick here is to know that sometimes your camera is wrong. If you have a very small subject (like a bird) with a very big, bright sky behind it, you are going to have to set your exposure such that your camera thinks the image will be over exposed by maybe as much as 3+ stops (or 8x the light) to get that bird exposed properly—depending on how bright the sky is and how much light is falling on the front of the bird. For many cameras, the meter only reads up to 2 stops over, so you will see a flashing arrow or some other indicator that you’re off the meter. (The numbers on the meter refer to how many stops the camera thinks you are over or under exposed, btw. +1 means you have 2x as much light as the camera thinks you need; -1 means  you have 1/2 the light the camera thinks you need—one stop either doubles or halves the amount of light that’s reaching the sensor).

So, the secret to getting people exposed so they don’t look gray is to override your camera’s meter by using manual controls or exposure compensation in semi-automatic settings. I do not often use semi-automatic settings because the amount of compensation you need will vary depending on how much of the frame is occupied by your subject vs bright background or if your subject moves from having a bright background to a dark background.

That said, I don’t like it when rapid action is unfolding and I don’t have time to adjust the exposure between shots manually when the sun is moving in and out from behind clouds or the light on the subject is changing for other reasons.

You pick your poison when you decide between semi-automatic and manual exposure control. For me, I will use shutter priority from time to time, but I do not use aperture priority. The reason I don’t like aperture priority is only because it changes which dial controls the aperture, which messes up my muscle memory and causes frustration for me on the next shoot.

Whether you use manual controls or aperture priority or shutter priority, you will need to remember to adjust either the exposure settings or the exposure compensation. In the first case, you would need to adjust only when the amount of light on the subject changes (without having to worry about the brightness or darkness of the background). In the second and third cases, you would need to adjust when the brightness or darkness of the background changes or when there is a significant change to the % of the image that is background vs subject.

So, using a semi-automatic setting might make more sense on a windy day with clouds blowing across the sun, a course where the subject goes in and out of shadows quickly and frequently, and/or if the brightness of the background is likely to be constant and/or if the subjects you shoot will be the same size in the frame more often than not.

Why? Because semi-automatic shooting modes will automatically adjust the exposure and if the light on the subject changes, you want the exposure to adjust in this case.

Using fully manual controls would make more sense if it’s more likely that the subject will have the same light falling on it but the background will frequently change. Or if you are rapidly getting closer or further from a subject such that how much of the frame they occupy changes a lot.

The camera’s meter would probably be correct for this image because of the darker background. 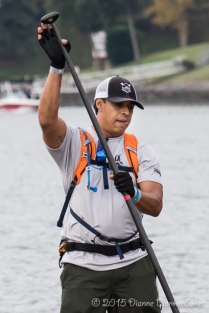 The camera’s meter will think this image is over-exposed because of the bright background.

In the case of the subject getting larger in the frame, the metering will be more accurate meaning that you won’t need as much exposure compensation as when there is a very bright background and a small subject, so if you’re exposure compensation results in correct exposure with a small subject and a big bright background, it will result in over exposure if you zoom in and fill the frame with the subject because the meter will not be getting as much light from the background and will get closer to the correct exposure for the subject.

If you’re shooting in circumstances like the Chattajack—it was a bright day with a lot of clouds that were causing the light to change, the subjects were occupying vastly different % of the frame throughout the day, the background brightness changed dramatically and quickly all the time, and subjects were moving in and out of shadows continuously—you’re going to go home with some poorly exposed shots regardless of which shooting mode you choose. 🙂

Remembering to keep checking the meter and readjusting will help reduce the number of bad exposures, but sometimes you just can’t change fast enough. This is why I recommend that for a situation like the Chattajack, you go with the setting you’re most comfortable with. This will avoid panic. If fully automatic is the setting you’re comfortable in, the Chattajack is not the day to decide to become an expert manually setting your exposure.