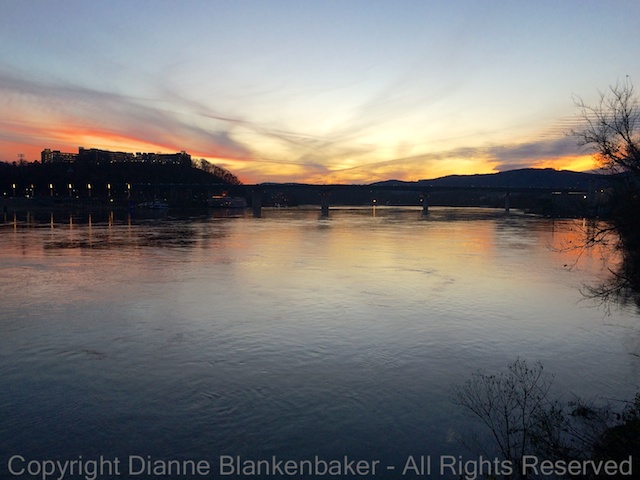 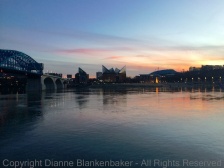 Let’s say you happen to be walking along a scenic riverfront at sunset.  There are interesting architectural features on the South side of the river and the sun, not having recently changed it’s course, is setting off to the West.  There are just enough clouds along the horizon to make for a decent sunset, but the sky above the horizon is clear, without much interesting going on.

Well, this is the joy of photography:  sometimes you have to choose.  You can’t always get what you want . . . so what do you need?

And that is the other joy of photography–you get to decide.

I’ve shared 6 of the images I took in the gallery above, each with the scene framed differently.  Below, I’ve taken these 6 images and pointed out the things that bug me about them.  There are many.  However, I think it’s useful to learn what other people look at and what bugs them in photographs when you’re trying to figure out what makes one photograph more appealing than another.  Remember, there are no rules, but part of photography is learning to see things differently.  Sometimes that includes your own photos.

Your Assignment:  Take a look at the comments I’ve made on my photos below.  I’ve color-coded them for things I think are positives (green), things that are less-than-ideal but tolerable (yellow), and things that are a deal-breaker for me (red). 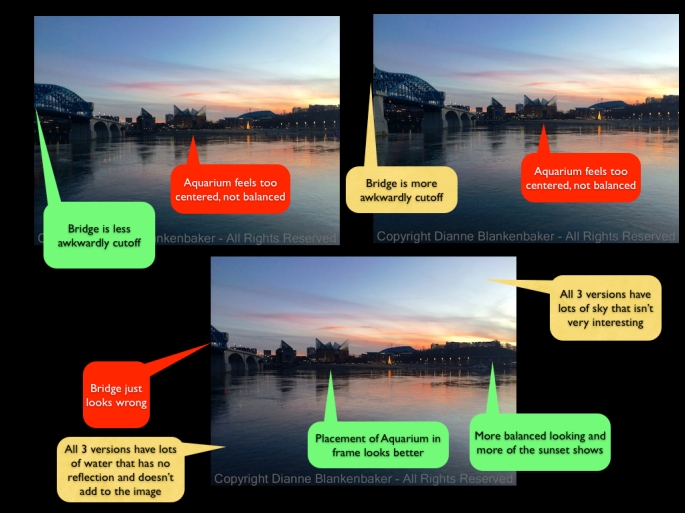 Why do you think two people look at the same photo and see it differently?

HDR photography has continued to grow in popularity–more and more cameras have built-in HDR processing. However, High Dynamic Range photography comes in a wide array of styles.  The HDR styles that result in images that no longer resemble photographs failed to catch on in the photographic circles I run in.  At the same time, there seems to be a growing appreciation for what can be accomplished subtly with HDR technology.

In case you are just jumping into this conversation, Lesson 9 was when we first introduced HDR and there have been several lessons that talk about it since, including yesterday’s lesson.

Revisiting the examples we used in the previous post, let’s take a look at what Pro HDR was able to achieve in both the 4S and 5S versions:

Now let’s look at the 4S Apple Camera App with HDR next to Pro HDR:

And, of course, the 5S Apple Camera App with HDR next to Pro HDR:

Take a close look at the above images.  Which look do you prefer?  If you’ve downloaded the Pro HDR app, try experimenting with your own photo to see if using the adjustments in the app allows you to get a range of looks that give you more flexibility than the Apple Camera app.

Here’s a simple tip that we haven’t talked much about:  when you find yourself struggling to get a photo you like, try shooting vertically.  I was once told by a photography instructor that roughly 85% of all photos taken around the world are taken horizontally.  By this, I mean the widest side goes left to right and the narrower side goes up and down, like this:

I can’t verify the statistic (I don’t even know how anyone would know that), but it is definitely true that the majority of the time, photos you see posted were shot in the horizontal (or landscape) camera position.  It’s pretty fascinating to take the same scene and look at it through a vertical frame.  Let’s compare these two photos: 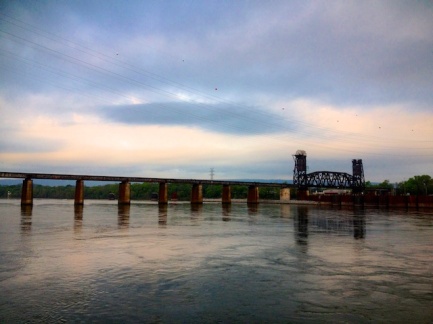 These were both shot using the iPhone 4S with the Pro HDR app.  Notice how different the two photos look.  The horizontal framing cuts out the rocks in the foreground and puts the emphasis on the sky and the reflection of the sky in the water, putting the bridge mostly into silhouette.  By going vertical (and shooting from a slightly different position), I was able to include the rocks in the foreground and expose for them, which also allows the details of the bridge to show.

Each photo has its own merits and each has its own deficits.  Which one you like better is a matter of taste.  But the point is that, in spite of these being of the same subject about 2 minutes apart, they look completely different.  That’s the beauty of changing the shape of the lens you look through–it gives you a whole new way of seeing.

In addition to giving you an option on how to look at the world, sometimes subjects just work better vertically.  For example, most portraits of one person work better shot vertically if you just want the person in the frame.  Dogs also often look better vertically when you want a photo of just their face.  (Check out Lesson 3 for an example of how shooting vertically let’s you get tight on a canine subject.)  And, of course, shooting tall, narrow subjects vertically allow you to eliminate empty background space.

Your Assignment:  For the next few days, every time you pull out your iPhone to take a picture, take one vertically, too.  Compare the horizontal and vertical framing to get a sense for what works well vertically.  Many subjects work equally well horizontally and vertically, but give you completely different looks.  Did you get anything you really like?